This title builds upon our 4Q 2021 letter, which questioned whether the bull market had gasped its last breath. It is impossible to predict in advance what causes bull markets to end, but they do indeed come to a close, and sometimes the catalysts are easier to predict than others. In this situation, we have been talking for several quarters about the normal suspects; excessive speculation and valuations, the expectations for higher interest rates, peak profit margins, accelerating inflation etc. But no one we know was predicting an invasion of Ukraine by Russia. To be clear, that is not what will ultimately be blamed for the end of the bull market, but it was the final nail in the coffin.

The last 120 days have shown us what happens to markets when they are very expensive and there are multiple negative catalysts that attack valuations at once. In this situation, beyond the tragedy of the loss of life and travesties of the invasion, we are facing hyperinflation, a very aggressive tightening stance by the Federal Reserve, the likelihood that earnings growth is going to slow dramatically, and the unwinding of the speculative excesses in many sectors… all at once.

It has been a persistent refrain from us that valuations were our primary concern, not earnings growth, as we felt valuations were simply pricing in perfection. What the chart below shows is that earnings (12m EPS Consensus) have continued to grow, but valuations have had a major correction. 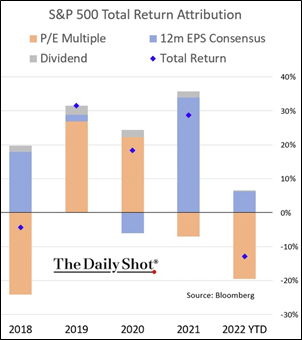 That is what investors experienced, and it is not fun, but it is a lot better than the “double punch to the gut” that we have been concerned about for the last few quarters. That is where earnings DROP and valuations DROP, at the same time… That is what creates bear markets like we all experienced in 2008.

One might read that and question the title, as we have not yet experienced the technical definition of a bear market (a 20% drop), at least in the S&P 500. The first quarter, which is the subject of this letter, actually ended up with only a slight decline. The S&P 500 was down less than 5%, and we had a strong rally at the end of March. But underneath the surface, and as of the time of this writing in mid-May, there is a different story to tell. We spent a lot of time on this subject last quarter, so we would encourage you to access that letter again for review. Suffice it to say, there are some sectors/industries where the stocks have declined 50% or more from their highs, and even some large indices like the Nasdaq that have dropped nearly 40%.

There has also been immense pain in some of the “safest” places. Everyone who has read our work or watched any of our videos over the last two years has heard us caution about how bad the risk/reward has been in fixed income. Those fears have now been manifested and bond investors have experienced a truly unprecedented amount of pain that has not existed for decades. Remember how the 20-year U.S. Treasury was yielding less than 2%, in December? Well, it is now more than 3.3%. That does not sound good, but is it really that bad for investors? Unfortunately, yes, which is why we have been pounding the table that plain vanilla fixed income was a very dangerous place to have capital. How much damage could it be? This chart will drive the point home: 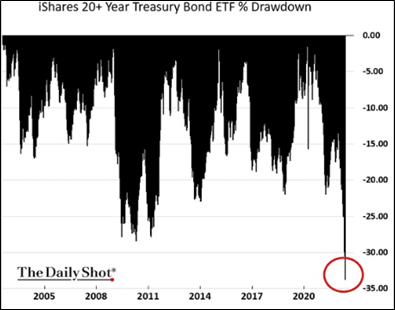 Yes, you are reading that chart correctly. If you owned that 20+ Year Treasury Bond ETF, you have seen a drawdown of nearly 35%! That is more than 17 YEARS of income erased in less than a few months. We could add chart after chart of other examples; from High-Yield bonds to Investment Grade bonds, and European bonds (which have dropped more than any time in the last 40 years…) and the pain experienced by investors is quite shocking.

Even the S&P 500 has gotten close to a bear market, as of early May, when it had an intraday move that took it more than 18% from its old highs. We shall see if the rally off those lows holds, or is broken, but what is clear is that the psychology of investors has shifted from greed toward fear. Interestingly, there has not been much panic in this market. The classic behaviors of a bear market have not been seen, such as panic buying of insurance/protection, or margin positions being unwound, creating indiscriminate selling pressure. Outside of the Reddit board and retail carnage (70% + declines), where the greatest froth existed, the pain experienced by most investors has been taken more or less in stride. One can view that behavior as a positive that the core of the market is more intact, or a negative sign that there is still too much complacency. As always, time will tell which it is, but we will focus on what we can say with high confidence.

Confidence. What is That?

In times of uncertainty, we always try to focus on that which we can predict with high confidence. There will always be those who try to predict that which is not predictable. To us, that is a dangerous approach that usually ends up badly for those individuals. Therefore, let us focus on what is fairly predictable. 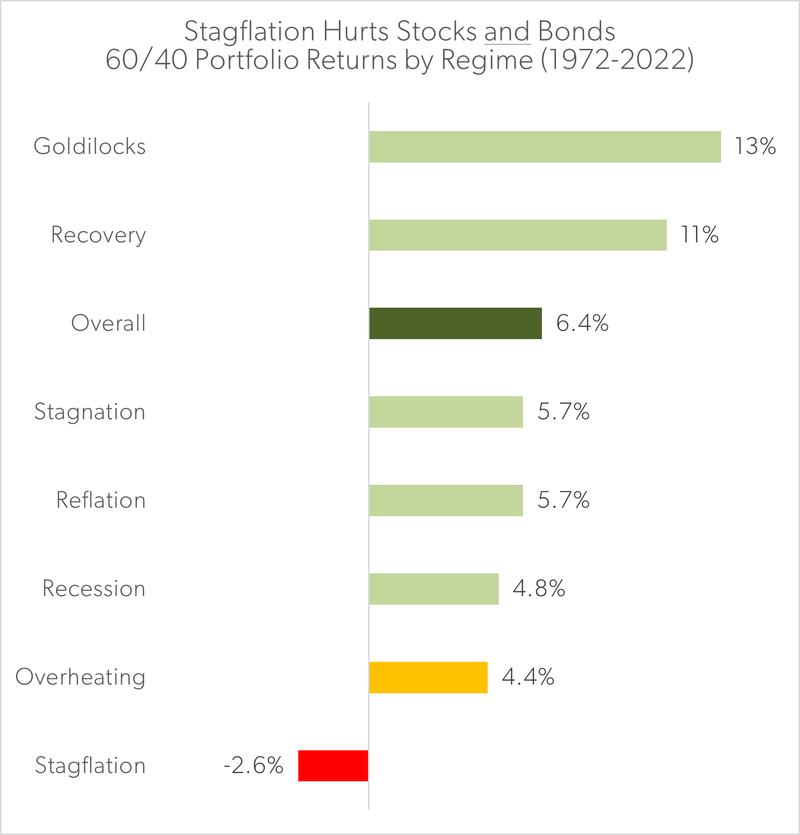 Note: Chart compares average yearly real returns on a 60/40 US stock-bond portfolio by macroeconomic regime since 1972.

Anytime something has 100% reliability, we should pay attention. The yield curve is not yet inverted, but there are several cautionary signs. The Federal Reserve is aggressively raising rates, and markets are expecting the Federal Funds Rate will approach 3% by year-end, and possibly as high as 3.5% in 2023. Thus, unless the 10-year U.S. Treasury is higher than those levels, the yield curve will invert. The market has already given us a glimpse of its concerns, in that the 2-year/10-year comparison briefly inverted a few weeks ago. While not the most statistically significant measure, it is a good warning sign to watch, as it is the market anticipating what is likely to occur.

When we evaluate all the data points it appears to us as inevitable that we will have a recession in the U.S. in the next 12 – 18 months. Thus, when we consider the public markets, we remain a “1” on the CAZ Scale and believe that the risk/reward from these levels is not favorable. For total clarity, we have moved to a “2” twice this year already, as we have seen valuations get more appealing. There are some sectors that we believe are fairly attractive and so we are willing to very selectively deploy capital, but today we are still a “1” but looking to become a “2” when the markets provide the opportunity.

What Should Investors Do?

This is where we may start to sound a bit like a broken record, but a correction does not usually dramatically alter our world view. We believe that investors should remain uncorrelated to the public markets and absolutely be more focused on protecting capital, than trying to stretch for returns. There are many very interesting opportunities for investment today, but the majority of them simply are not in the public markets. That time will come, usually after a much more significant drawdown in stock prices. We will tell you when we believe that opportunity is there, just like we did in March 2020 and March 2009. When the “scale” becomes a 3, 4 or 5, we will provide differentiated ways for investors to take advantage of the opportunity. Until that happens, we remain focused on preserving capital in the public markets and maximizing our returns via the private markets, where we believe we can best profit from the major themes we have confidence in.

The Growth of Private Equity as an Asset Class continues to be an irrefutable theme that we believe will persist for many years. As one of the world’s largest investors in the space, we are continuing to identify highly attractive investments and would encourage you to allocate a significant portion of your portfolio to this theme.

The Change in Consumer Behavior, specifically “cord cutting”, is an irreversible trend that is hard for most investors to participate in. Through our ownership of minority positions in professional sports teams, in Major League Baseball, Soccer, Hockey, European Football and in the NBA etc., we believe we will benefit from the need advertisers have to reach audiences via live events. We are one of the few places in the world that investors can access the opportunity to own some of these iconic brands.

Many of our Partners have mentioned how convenient they found the audio recording of our quarterly letter to be. If you have not yet had the opportunity, we encourage you to visit the Media & Insights tab on our website and click the ‘listen now’ link for the applicable quarter. The direct link will also be provided at the bottom of the letter for your convenience.

Our investor portal is in beta testing…. still. It is such a massive undertaking, and we are very confident that you will really enjoy it when it is launched. Yes, that day will get here. We simply cannot get it wrong, and every time the Team thinks they have worked out all the kinks another knot seems to form. Every investor can appreciate that our margin of error in this project is zero, so we must be 1000% confident before we can release the system.

In closing, we have a favor to ask of you. We are growing very quickly and really need to find high quality people to join our Team. Every area of the organization is hiring, including research, operations, trading, and investor relations. Please send us every rock star you know that has at least a few years of business experience. If they are talented, we will find a seat on the bus for them. Most of the roles are based in Houston, but some of the investor relations positions can be located in other geographies. Please have all potential candidates email us via jobs@cazinvestments.com.

Please let us know how we can be helpful to you and know that we appreciate your confidence that you have shown in us. We are grateful for your partnership.

All our very best to you and your family!